Some of Asia’s largest battery manufacturers are jeopardizing their access to sufficient raw materials by reluctant to invest directly in manufacturers in Australia who supply them.

Industry insiders told the Financial Times that more deals need to be signed to allow South Korean companies – including LG Energy Solution, SK On and Samsung SDI – to secure supplies of minerals to make electric vehicle batteries, including graphite, lithium, nickel and cobalt .

“We’re not seeing nearly enough closed deals,” said Ross Gregory, executive director of electric vehicle consultancy New Electric Partners and chairman of the Australian Chamber of Commerce in Korea. “It is inevitable that Korean cell manufacturers will have to invest more to secure supplies.”

According to Benchmark Mineral Intelligence, at least 384 new critical mineral mines are needed to meet global battery demand by 2035, with demand for lithium-ion batteries expected to increase six-fold by 2032. South Korea produces batteries for a quarter of the world’s electric vehicles and is a key partner for Washington as the Biden administration works to reduce its reliance on China.

But even as the US introduces new tax breaks under the Inflation Reduction Act to boost domestic production and encourage producers like South Korea to work with free trade partners like Australia, the needed deal between the latter two countries isn’t accelerating.

Tim Bush, a Seoul-based electric vehicle battery analyst for UBS, said Korean battery makers are cautious amid uncertainty over how the law will be implemented. He noted that the US government has not yet determined exactly how Chinese involvement in the supply chain of an individual battery would bar it from receiving valuable tax credits.

“Korean battery companies are waiting to see what’s legal and what’s not before making any major investments,” Bush said. “If, for example, Chinese processors are no longer even allowed to be involved in projects outside of China, the Koreans will have to rethink their strategy.”

Most critical mineral mines in Australia are still operated by small companies seeking joint ventures or direct equity investments in individual projects. However, Korean battery makers have been reluctant to sign deals they see as risky.

“We are currently reviewing such investment requests but we are trying to be cautious. These requests often delay signing our long-term supply contracts with them,” said a Korean battery manager.

Korean export credit agencies bear the scars of failed mining companies in the past. “Our state credit agencies often provide funding for overseas mine development, but these projects are very risky as mineral prices are volatile,” said an official with Korea’s Energy Ministry.

“Battery companies are investing in some mining projects as needed, but they are reluctant to make large investments amid the growing need to build their own battery and battery materials factories,” the official added.

An Australian banker specializing in mining deals said Korean companies and lenders are too cautious.

“There is frustration with Korean involvement in Australian mineral projects because they clash with the culture of traders and traders in Australian exploration,” the banker said. “There is a real danger that Korea will be left behind.”

There are some deals coming up. Last month, SK On acquired a 10% interest in Australia’s Lake Resources, a long-established lithium developer, under a 10-year lithium supply agreement.

Gregory, who advised Lake Resources on its deal with SK On, said part of the reluctance of Korean battery makers is because they are more chemical than mining.

He noted that Posco, the Korean steelmaker, has been much more active in investing in the battery supply chain than LG, SK or Samsung as it has invested in iron ore and other projects in the past.

Posco and LGES have both been supporters of Queensland Pacific Metals, which is developing a nickel and cobalt processing facility in Townsville. Last month, Queensland signed a major investment deal with General Motors, a sign that US automakers are increasing their interest in Australia’s minerals supply chain.

Gregory urged the Australian government to step in and fund more deals, including through direct stakes in projects.

“What’s missing is government support — China is doing it, the US is starting to do it, but Australia isn’t doing enough yet,” Gregory said.

“A$20-30 billion should not only go towards promoting the exploitation of upstream resources, but also towards building a manufacturing industry to process these materials. The industry needs a head start.” 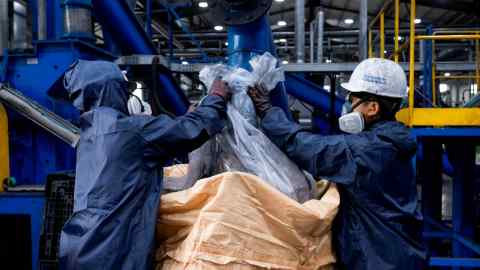 However, with the global struggle to secure resources, some executives believe it’s only a matter of time before Korean battery companies become more aggressive.

Andrew Penkethman, chief executive of Ardea Resources, whose Kalgoorlie nickel project hosts the largest nickel-cobalt resource in Australia, said he can afford to wait for the right deal.

“Since the Inflation Reduction Act, we’ve seen a significant increase in engagement from potential strategic partners, but people are still working out how to do that,” he said.

He said he expects Korea’s battery makers to come up with the idea that direct investment in projects is necessary to secure supply in the long term.

“We will see an acceleration in lithium-ion battery deals being closed and our patience will be rewarded.”