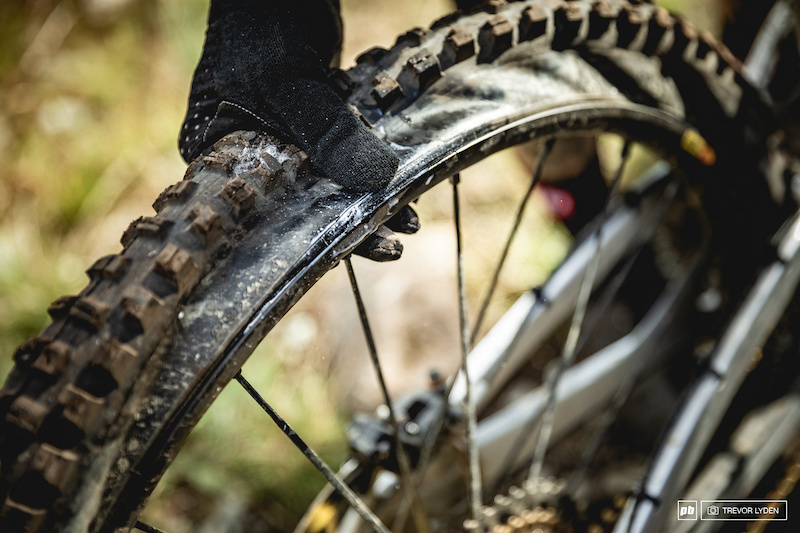 I’m typing this while lying on the floor, my feet propped up on the end of the couch in a vain attempt to drain the spasm juice from my twitching quads and hamstrings. If I ever decide to get up there will likely be a Levy-shaped salt patch on the floor, but I won’t start thinking about it for at least a couple of hours. I want to tell you how I just rolled into the Alps from a mighty epic and had the best descent of my life on rough singletrack…

But that didn’t happen.

The truth is far less glamorous. I was pedaling back to the house on the road when I spotted two other riders in front of me. Without realizing it, I suddenly found myself four gears higher, my eyes fixed on her back like a panting, sweaty missile closing in on its target. My pace increased from a leisurely spin to “I can take this two more minutes” and the gap closed from 100m to 200m as I pictured what Nino looked like chasing a World Cup win on the last lap. Peering through the red haze and noticing my prey’s chariot trailer, complete with two children in it, and that the drivers I assumed were racing me were actually two grandparents driving with their grandchildren in tow one for a spin on their townie bikes.

I rolled past them in embarrassment when we reached the summit; “Nice day for a ride!” they both said happily to me, but I was too dejected to respond with more than a cursory nod while hoping they couldn’t hear me breathing through my eyeballs.

I have a few good habits like taking care of my drive train, making sure my bike isn’t rattling and I love a good stretch session. But I also have a lot of bad habits, such as B. Full Meat Head mode when someone is in front or behind me. It’s good to be competitive and motivated, sure, but Rick, Nancy, and their two grandkids all think I’m an idiot. That’s fine in and of itself, but I often make a bad habit worse by letting the outcome of those efforts dictate my attitude during and after. So if I manage to reel in old Rick and Nancy, it’ll probably be a good ride and I’ll have just enough self-esteem as a person to try bikes again tomorrow. And what if I can’t close the gap with that Chariot trailer? Then I’m a piece of shit that should have stayed home, and I’m spending $20 on candy that I don’t want to eat all at once, but will definitely eat all at once.

Anyway, to keep this from turning into an individual therapy session disguised as meeting my article quota for the month, I figured I should ask the PB editors about their bad habits…

“Not lubricating the chain, not inflating my tires every ride and not changing my tires often enough,“Sarah told me sheepishly, possibly because I’ve been known to yell derogatory at anyone who takes a ride without checking their tire pressures.”And maybe the habit of always riding the same trails,‘ she quickly added, something I’m also guilty of. We all seem to click with certain trails, whether it’s because they’re close to home and access is easy, or because they have that one section, or even just a curve or jump, that reflects how you enjoy cycling drive. I bet you got that trail you basically memorized and you know where to absorb and when to pop, the fast way through those rocks and that inner line The perfect spot for the next section: riding blind is fun , but being committed to riding a trail you know by heart is even better.

Still, it’s all too easy to choose what you know, rather than risking your limited free time to ride something further afield or you’re not as comfortable on.

You may have read that Henry really hates group rides and other people in general, a feeling he says comes from his dislike of having to wait for other people to sort out their shit. “My worst cycling habit is impatience. People who have to stop to tie their shoelaces and I tell them to fuck themselves and I hope they and their family rot in hell.” he told me with a straight face. “When I first started mountain biking, group riding was the be-all and end-all and I’ve been through it for many years. You just have to enjoy it, don’t you? Friends, nature, complicated coffee orders, and things that take five times as long as they should. Oh perfect.“

I’m on the same page as Henry — about 80 or 90 percent of my rides involve Bob Seger as my only companion in my headphones, often on a bike with under-travel and under-tired. This is another questionable habit of mine that has bitten my ass more than once. I love being under-driven for all sorts of reasons, from misplaced pride to “I better not try that on this downcountry bike“But on a bike that has too much head angle and not enough suspension, there’s a lot less room for error. Of course, that’s exactly why they’re fun, but that’s also why I’m looking at a double ankle transplant , while I want to inject paracetamol right into my back But hey, downcountry is fun, right?

Another fun, low-responsibility thing is skidding. I’ll just say it: a big unnecessary slide can feel damn good, and even more so when you use it as a legitimate technique rather than just ditching down the middle of your local singletrack. Ride don’t slide and all that of course, and there are plenty of places, ways and situations where locking up the rear brake is wrong and you’ll be a horrible, horrible person who then needs to follow up with a virtuous social media post to rebalance your chakra. With great stopping power comes great responsibility, so try to just be a fool if you know your skid marks won’t be there for twenty years or have to be filled in by an overworked trail builder who’s sick of your shit. Don’t slide, okay? But if you slide, slide responsibly and for a long time.

While I could easily write a 10,000-word dissertation covering only half of my bad habits, it’s sunny and I’m sure there are some complete strangers on the trail that I need to hunt down before I cramp terribly and am Dollar candy store stopping on the way home.

What are some of your bad habits?