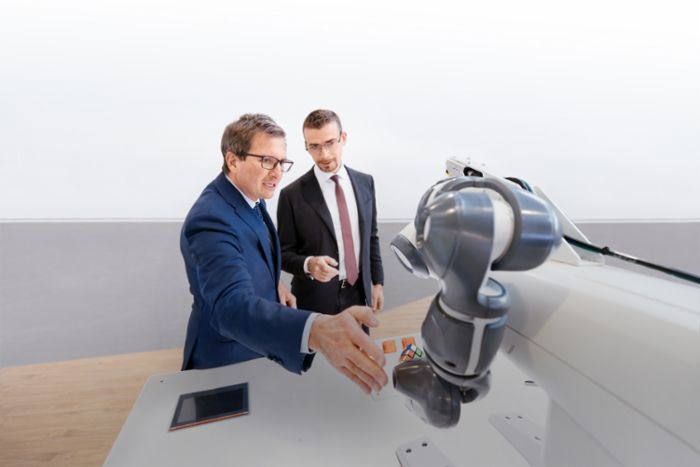 Robots weld, solder, paint, transport and work hand in hand with people in many ways. Industry and the service sector would be unimaginable without them. A look at the figures shows the importance of these technical assistants, especially in industry. According to the International Federation of Robotics (IFR), around one million robots were in use worldwide in 2010. That number tripled to over three million by 2020. That doesn’t surprise Leonardo Leani, Division Manager for Robotics & Discrete Automation at ABB, in Italy. “Companies install robots to optimize productivity, reduce costs and ultimately increase profits. In fact, the robots make them more competitive – on a sustainable basis.”

In fact, robots are conquering more and more areas of application. The e-commerce boom of recent years has fueled the rise of autonomous, intelligent and secure parcel loading and unloading systems. There are also new possibilities in connection with electromobility. In many places, for example, charging processes for electric vehicles are made easier by automated assistants. Together with the US company Dorman, ABB has succeeded in automating the recycling of electric car batteries – and with impressive speed. With robots, the production time can be reduced by 66 percent and the daily output of “battery packs” can be tripled.

In addition, robots are incorporating more and more innovations from related technologies such as artificial intelligence, machine learning, cloud computing and 5G cellular. Around ten times faster than their 4G predecessors, 5G systems can transmit larger amounts of data without time delays. This in turn promotes new Industry 4.0 solutions and also enables the use of robots in teleoperation.

Higher productivity thanks to robots

Despite the benefits they offer to industry today, robots were a cause for concern in their early days. Claudio Brusatori, partner at Porsche Consulting Italia and head of ABB’s customer team, recalls the fear that machines could marginalize humans. But instead of displacement, more and more industrial strategies are relying on the cooperation of humans and robots. “User-friendly, simple, agile and responsive robots are now being developed to interact closely with humans,” he says. “They are evolving from tools to sophisticated and collaborative machines – improving processes and promoting employee well-being.”

Even if robots replaced humans, that would be in areas we wouldn’t miss, Brusatori explains. “Robots relieve humans of the need to enter hazardous locations or toxic environments. They can carry heavy loads under adverse conditions and are not affected by contaminated substances.” Even former skeptics are now recognizing the advantages that robots can offer for sustainable and productive work. The initial reluctance has given way to a new sense of opportunity.

“We are seeing a real paradigm shift in the production processes,” confirms ABB manager Leani. “Robotics has proven to be a simple and versatile means of increasing quality and productivity in a wide variety of industries.” Although more and more companies want to take advantage of modern robotics, they are not always willing to invest the large sums of money for high-quality technical systems. Manufacturers like ABB have responded to this attitude by offering new sales models — including rentals for specific periods — to attract customers, including those wary of their cash flow levels.

Long-term developments such as the shortage of skilled workers in Europe give Leani even more reason to believe that companies will continue the trend towards “robot colleagues”. This trend is also underlined by a survey of 1,650 international decision-makers in the industry conducted by ABB and the market research institute 3Gem Global Market in January 2021. Around 85 percent of respondents believe that the Covid pandemic has accelerated the wider use of automated technologies. Almost as many (84 percent) expect their companies to adopt robots or other automated systems, or expand their existing systems, within the next decade.

Other factors could contribute to market uncertainties. In 2020, a tectonic shift in the customer structure for industrial robots took place. Since 1961, when the first industrial robots were sold to General Motors and installed at its plant in New Jersey, the automotive industry has been the largest consumer of these technologies. In 2020, however, the electronics industry took on the role of premium customer. The impact of this changing of the guard cannot be predicted with certainty at this time.

Leani and his colleagues don’t just want to promote sustainability in sales. ABB also wants to take responsibility and help reduce CO2 emissions. Leani has set itself ambitious goals. He wants to help his customers reduce their annual CO2 emissions by at least 100 megatons by 2030. This corresponds roughly to the annual emissions of 30 million cars or 40 coal-fired power plants. “This is a way to achieve carbon neutrality in all of our factories and reduce emissions throughout the supply chain.”

Leani is also on a modernization course in other areas. Not only does he attach great importance to the satisfaction of employees and contractors, but also to gender, generational and LGBTQ+ diversity and equality in the company. “In terms of gender equality, we’re looking to align our managerial and employee numbers by 2030,” he says. Promoting a good work environment seems like a good idea when dealing with skills shortages – especially in areas where robots cannot yet be deployed.

Founded in 1988, the ABB Group and its predecessor companies have a heritage of more than 130 years of outstanding innovation. The company’s origins lie in the merger of ASEA and BBC, formed in 1883 and 1891 respectively. ABB Robotics is present in more than 100 countries and active in the fields of robotics, energy and automation. These are divided into four macro fields: Electrification, Process Automation, Motion and Robotics. ABB has achieved impressive market success with products such as the FlexPicker packaging robot developed in 1998, the YuMi launched in 2015, the world’s first truly collaborative robot, and ABB Ability, a leading digital solution launched in 2017 that connects customers to the industrial internet of things.

First publication of the text in the Porsche Consulting Magazine.