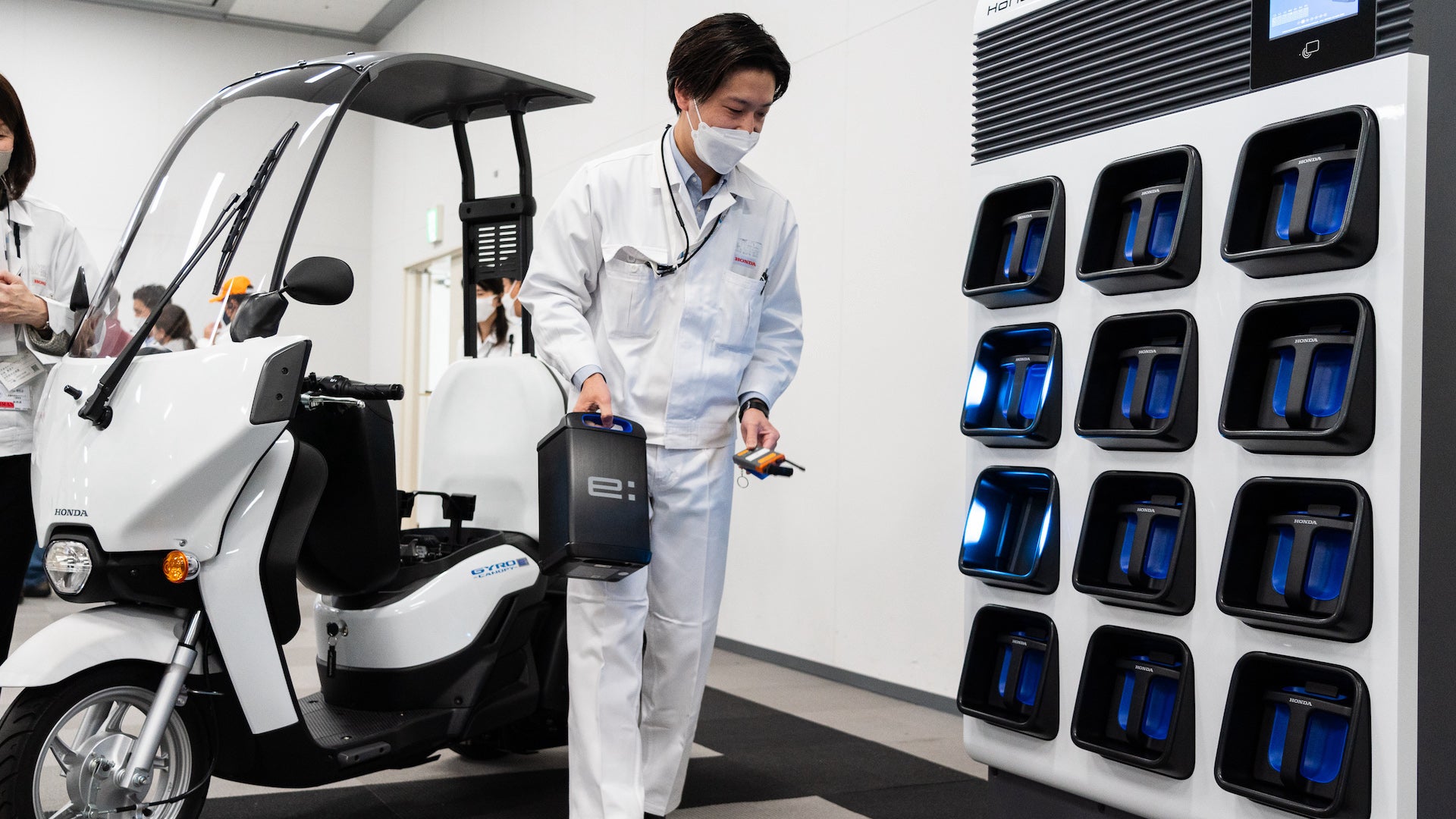 During an interview with Honda CEO Toshihiro Mibe and electrification chief Shinji Aoyama in Tokyo, the executives responsible for leading the automaker through these changing times told me that while building EVs is important, it is the ultimate goal To achieve carbon neutrality by 2050, electric, hydrogen fuel cell and even hybrid eVTOL vehicles will need to evolve to penetrate every corner of the transportation sector. However, one of the more interesting concepts we discussed was creating an environment where different vehicle types share a common battery pack. From cars to scooters to lawnmowers and even homes, getting rid of single-purpose batteries would be a win-win for consumers and Honda alike.

Some of this hardware already exists and is referred to as “Honda Mobile Power Pack e” and “Power Pack Exchanger e”. The mobile lithium-ion battery is a carry-on battery, similar to the one we use today to charge our devices on the go or even start a car – only bigger and heavier. A Honda Mobile Power Pack e currently weighs around 20 pounds and delivers up to 1.3Wh. The Power Pack Exchanger is a type of vending machine where the Power Packs can be charged, stored and given out to users. At least that’s the commercial solution. There’s a little-known housing solution Honda is working on that uses the same concept but scales it down to work for a home. It fits four mobile packs instead of 12, and it can also charge the mobile units via solar power if the house is equipped for it.

The premise is simple, and I’ll use myself as an example: I have a lawn mower, a snow blower, a dirt bike, and a small sedan. (Yes, the latter two are Hondas.) Although I ride my Civic every day, I don’t ride my bike that often, nor do I use my blower or lawn mower. In fact, I almost never do. This concept would allow me to have a set of batteries that I can share and swap with all my Honda machines. Why would a custom built battery for my mower be dead all winter when I could use the same power source for my snow blower? Likewise, I use the snow blower’s battery for my mower in the summer, although I could borrow it to power my dirt bike.

When you apply this concept to a vehicle used for commuting, it makes even more sense. It would be very easy to remove your vehicle’s batteries and charge them overnight in the Pack Exchanger – much like you would charge an electric vehicle overnight today. The biggest difference is that when you wake up in the morning and it’s a beautiful day, you can skip the car and use the batteries in your motorcycle instead. Storm? Put them in your car and leave the bike at home. Even better, should your block lose power, the heat exchanger can use the power from the power supplies to feed it back into the house and provide power for “the average Japanese house”, I’m told. Pretty handy, even if that could only power your average American studio apartment for now.

According to a presentation I gave at Honda’s R&D facility in Tochigi, Japan, a large three-wheel scooter could go almost 100 miles with two fully charged packs. No other range estimates were given for larger vehicles, although these packs could also be used on ATVs, personal watercraft, and other rides in the future. Engineers also demonstrated a Honda Power Pod e, which is essentially an electrical generator. While still in the prototype stage, this would be a practical power solution for campers or work teams who typically venture off-grid.

Replaceable batteries also open up various other possibilities; like a helping hand. Should you come across a stranded motorist with a compatible vehicle, you could share a Power Pack with them to get them to their destination. A bit of a stretch, perhaps, since you probably don’t want to give away your expensive battery, but hey, it’s a possibility.

Finally, there is the manufacturing aspect of this battery/charger environment. When you have a variety of vehicles that run on the same type of battery, you dramatically reduce the time, money, and effort that goes into manufacturing single-purpose batteries. It’s the same concept as if one billion devices were powered by AA or AAA batteries. Why spend millions and thousands of man-hours developing a battery that only works on one type of device when it could work on hundreds?

Honda has already launched one of these exchangers in Tokyo, where subscribers can scan their RFID tags to unlock battery packs for their scooters. Other companies are already taking similar approaches in Taiwan, and another startup is said to bring a similar solution for tuk-tuk taxis in India.

It goes without saying that this application needs further development before it can be launched in a market like the United States. We drive longer distances, prefer larger vehicles and our overall energy use is radically different than most other countries. Replicating this concept with solid state batteries could certainly bring it closer to reality. So while that solution is not here nowI think this concept of swapping batters makes a lot of sense.

Do you have a tip? Email us at tips@thedrive.com